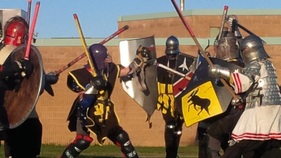 The SCA welcomes you to the Current Middle Ages! Chivalry comes to life in the Shire of Mare Amethystinum, Thunder Bay’s chapter of the worldwide history organization. For over 50 years the Society for Creative Anachronism has brought people together to rediscover pre-17th century life. Explore ancient skills like blacksmithing, cooking, calligraphy, archery, and many more. Compete in tournaments of high impact armoured combat or learn the delicate and deadly art of rapier fencing. Find us at facebook.com/groups/tbaysca and check out our display and combat demonstration at ThunderCon! ​
​ 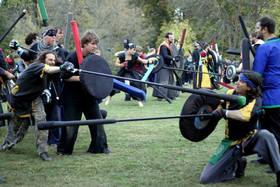 Discover a world of fantasy battles with the warriors of Thunder Guard, Canada’s premier realm in the international Belegarth Medieval Combat Society. Since 2006, parks around Thunder Bay have been turned into battlefields where brave warriors take up padded swords and clash for honour and glory. This free, full-contact combat sport invites players to take on a new persona in a world of myth and might. Make new friends, get active and learn to craft fantasy costumes and armour. Anyone age 16+ is invited to join us at Hillcrest on Wednesdays at 6pm, Vickers Park on Saturdays at 6pm, or join Warriors of Thunder Guard on Facebook. Come see some live combat at ThunderCon and stop by our booth to learn more!
​ 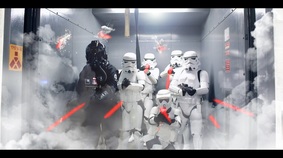 The 501st Legion is a worldwide Star Wars costuming organization comprised of and operated by Star Wars fans. While it is not sponsored by Lucasfilm Ltd., it is Lucasfilm's preferred Imperial costuming group. Star Wars, its characters, costumes, and all associated items are the intellectual property of Lucasfilm. ©2014 Lucasfilm Ltd. & ™ All rights reserved. Used under authorization. The Legion is an all-volunteer organization formed for the express purpose of bringing together costume enthusiasts under a collective identity within which to operate. The Legion seeks to promote interest in Star Wars through the building and wearing of quality costumes, and to facilitate the use of these costumes for Star Wars-related events as well as contributions to the local community through costumed charity and volunteer work.
​ 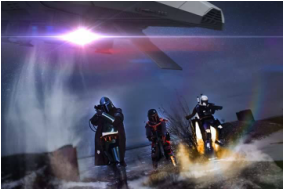 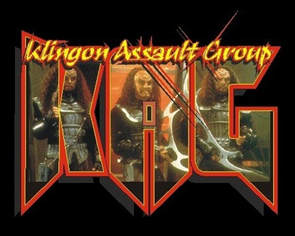 The Klingon Assault Group is a community based organization built around mutual love of Star Trek, science fiction, and cosplay, with a focus on Klingon culture. The goals are simply to make friends, have fun, and get involved in the community through public appearances, special events, and community service activities. Any non-human alien can become a member of the Imperial Xeno Legion. All who wish to serve the Empire are welcome!
Crimson Dawn Klingon Assault Group
​ 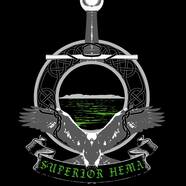 Watch and marvel at Historical European Martial Arts. This company has evolved using manuscripts and treatises written by masters of the medieval and renaissance eras, and their skill, honour, and general bad-assery will astound you!
Sat Coliseum Stage 11:15am ​Bringing back the boombap with class! Thundercon is hosting a group of musicians ranging from hiphop to pop/rock. They'll be crushing the main stage at select times, performing a special anthology of Thundercon inspired original and cover songs. Now is your chance to get down to your favourite backing tracks from the geeky TV and film that made them hits. Plus, artists will perform their own unique original Thundercon infused bangers.
See schedule HERE

Improving lives on a daily basis, the St. John Ambulance therapy dog program brings joy and comfort to the sick, lonely and those who need a friendly visit. The program is growing, boasting 3,354 therapy dog program volunteers and dog teams in 2015 which assisted more than 120,000 clients throughout the year. Therapy dog teams gave more than 230,000 hours of their time visiting hospitals, retirement residences, care facilities, schools and universities.  The friendly attention and acceptance of these four-legged volunteers are always greatly appreciated